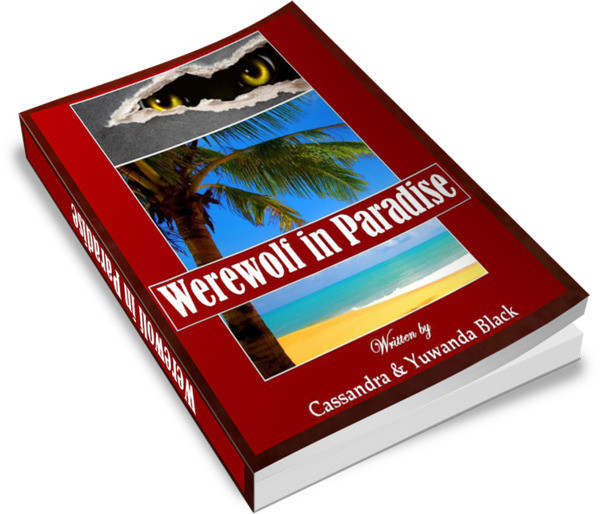 The silver moon gave perfect, movie-like lighting to the cannibalistic creature in front of him. Gold eyes flashed . . .

Razor sharp fangs snarled . . . Powerful legs lunged, again and again, each time taking chunks out of his legs, arms, side. In less than a minute, Allan was wearing a suit of his own blood. The gummy warmness travelled down what was left of his limbs ...

Literature & Fiction, WEREWOLF IN PARADISE, a Novel by Cassandra Black and Yuwanda Black.

About the Authors: Cassandra and Yuwanda are sisters. Writers, publishers and entrepreneurs, the sisters live in the Atlanta, Georgia area and travel frequently to the Caribbean.

“Dumb bitch! You did this on purpose. I told you, I’M NOT READY!” he snarled. He was inches from her face.

The blood oozed from Carolyn’s swollen lip to the lace trim on her silk white blouse. She turned away to avoid the next blow. He shoved her head-first into the bathroom door. Her wrist protected her face from the silver towel knob anchored in the heavy, dark wood.

“Please Tyrone,” she begged. “I didn’t do it on purpose.” Her petite frame trembled as she tried to keep her balance. The doctor said it’s possible to get pregnant on the pill, please!” she pleaded, afraid to turn around.

Tyrone spun her around with a force that splattered the crimson trail from her lips to his light blue Armani shirt. The last thing she remembered was being kicked in the stomach by her husband as she pooled into a human ball on the cool tile of the bathroom floor.

Carolyn bolted up to the searing pain of a dog’s teeth in her butt. The bright red blood oozing from the open wound frightened her. Dr. Yoruba said she had to take the pills -- to stop the changes. What changes? Carolyn was fine.

Something killed the tourist on Lighthouse Road. It couldn’t have been human.

Ellen Knowley, the new Alaskan detective had seen these types of killings before, on the Frontier. The killer was not human and the bloody carnage of this werewolf in paradise was just beginning.

Allan held what was left of his tongue in one hand and tried in vain to stop the flow of blood with the other while running from the beast in front of him. With every step he took, the sanguine fluid spewed like water from a busted pipe. Trying in vain to scream, every breath bought forth a fresh stream of what felt like warm water. Only he could see it was blood . . . his blood.

The silver moon gave perfect, movie-like lighting to the cannibalistic creature in front of him.

Powerful legs lunged, again and again . . . each time taking chunks out of his legs, arms, side.

In less than a minute, Allan was wearing a suit of his own maroon bodily fluid. The gummy warmness travelled down what was left of his limbs, forming slippery pools in his brown leather Eccos.

Losing balance in the blood-soaked sandals, he tripped on a large rock and fell backwards against the zinc fence that separated somebody’s property from the road. The man shielded his face with one hand and tried to locate a stick, a bottle, anything with the other, to help him fight off this beast that had materialized out of the darkness.