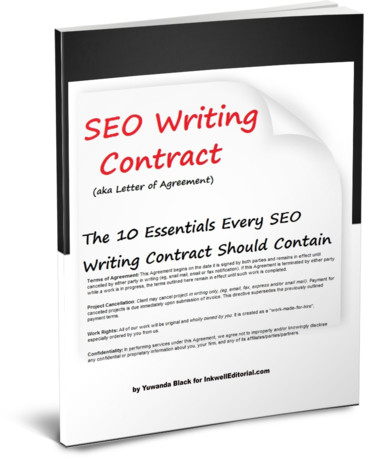 The specifics outlined in the SEO Writing Contract / Letter of Agreement will help you get paid on every project, every time -- so you never have to worry about getting stiffed by a freelance writing client. CUSTOMIZABLE SEO writing contract included!

Like a lot of the ebooks I write, this one was inspired by the actual experiences of fellow freelancers. They usually write in explaining a problem they’ve had / are having with a client, and are seeking my advice on how to go about solving it.

This ebook is no different. It includes 38 pages of actual scenarios of freelancers losing money / almost losing money; actual correspondence with clients about projects -- and so much more.

FYI, a CUSTOMIZABLE WORD VERSION of an SEO writing contract is included in this package.

As an aside, I’ve been a freelance writer since 1993 and a search engine optimization (SEO) writer since 2007. I also own/manage New Media Words (NewMediaWords.biz), an SEO writing company I formed in 2008. Hence, I receive a lot of questions from fellow freelancers about everything under the sun – from invoicing to how to set rates.

Note: Learn more about me at http://InkwellEditorial.com/about.

Clarify Details of Every Project, Every Time, So You Never Worry about Getting Paid!

Starting on the next page are a couple of actual scenarios that were relayed to me by fellow SEO writers.

The specifics outlined in the SEO Writing Contract / Letter of Agreement in this ebook will help to clarify situations like these – and others – so you never have to worry about getting paid for a job, or losing a client because of confusion about a job(s).

EXCERPT: GETTING “BURNED” BY A CLIENT: HOW ONE FREELANCER LOST $500

Here’s her email. My response follows.

[I’m writing because] I am a bit perturbed. And don’t know if this ever happened to you, or if you can give pointers to your readers about this situation. Here’s the scenario:

I had a repeat client (he’s the one who sent me my [biggest client]).

He placed an order over the phone for 38 articles.

I went over pricing over the phone, and I was confused and wanted to be clear that he was ordering 38 articles.

I distinctly remember this because he kept saying 19 x 2.

He said correct, and we distinctly went over that the total cost of the project was going to be ($1,000).

He let me know that he was paying 50% in advance, which he did.

I sent him a Letter of Agreement, which I always do, to let him know I understand the scope of the project. He said in a very cocky voice, do whatever works for me. (By the way, he is very very cocky. It feels like every time we speak on the phone and I ask him a question for clarification, he dumbs me down). That’s why I kept asking him questions about the parameters of the project because I wanted to make sure we were on the same page.

I sent him the work, and I needed to make a few edits. No problem. But, now he called me and said I didn’t need to write that many. However, I distinctly remember going over the numbers with him with a calculator and him agreeing to it.

I don’t think he’s trying to stiff me, he’s still sending a lot of referrals my way. However, I am very disappointed by this action. But, I guess I need to cover my ass more. Since, I never had problems with him in the past, I didn’t mind if he didn’t sign the LOA because he has always paid with no problem. I thought he had built my trust until now.

I did send him a copy of the letter of agreement, and did express my confusion and frustration, but in a very polite manner. I don’t want to piss him off because he’s still sending me work for his clients. However, this experience is leaving a very sour taste in my mouth to work with him. I know that he is very very very cocky, but I always overlooked it because of the constant stream of work he provides.

I really don’t see where I was wrong. I am thinking that for now on, I should have everyone sign and fax, or do some kind of electronic signature so we can both be on the same page. It’s a bummer because that’s 500 dollars lost. I really don’t want to get in a collection battle, when he’s stating that I only needed to do a certain amount than what he contracted me for.

Has this ever happened to you?

No, this has never happened to me. Like you, I tend to go over and beyond when explaining the parameters of a project.

I don’t send a letter of agreement (LOA), but I do send emails that explain exactly what is expected (eg, number of articles and word count), the date it’s due, what we need to get started (ie, 50% deposit), and who the contact person for the project is if there are questions along the way, etc.

As you outlined it here, I don’t think you did anything wrong (that’s too strong of a word). But, following are a couple of places where I think you may have gotten off track.

1. Your Business Processes: Whatever they are, follow them EVERY time with every client.

Like in any relationship, you train people how to treat you. So, for example, if your business practice is to send out a Letter of Agreement (LOA) and have it signed before work begins, then stick to that. This way, if there’s ever a problem, you can go back to this document and present to the client what THEY signed on for – literally and figuratively speaking.

2. Outlining Cost: While this will be part of your LOA, state it in an email – even if you do say it over the phone. In my email correspondence with clients, I always say something to the effect of, “The total cost for the project is $450. We require a 50% deposit to get started ($225), with the remainder due upon completion of the project (we will invoice you expeditiously).”

If you’d done this, your client would have known that $500 wasn’t the total cost of the project, it was the 50% deposit, with another $500 being due upon completion. At that point, he could have disputed it and you all could have gone over the parameters of the project again.

The in-depth details in this freelance / SEO writing contract will help you avoid uncomfortable situations like this altogether -- so you never have to worry about getting paid for your work.

P.S.: Don't forget -- a CUSTOMIZABLE WORD VERSION of an SEO writing contract is included in this package.